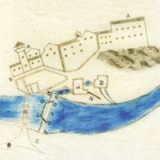 This podcast accompanies you to discover Fermignano when it was only a castle, before its modern conformation.

Fermignano is a small town of roman origins. The count Guido Antonio Montefeltro, initiator of the Urbinate lordship, made “the castle” of Fermignano build next to the bridge over the Metauro river, at the end of the 14th century.

Around the 15th century, the castle – together with the major way, seven alleys and three squares – took shape.

The town was equipped with walls on which two doors opened: one next to the bridge over the Metauro river and next to the tower called “porta Romana” which was demolished in 1870, the other one beside the church of San Pietro and on the top of the major way that leaving the castle, leads to Urbino and that was demolished at the end of the 19th century.

The bond with Urbino was very profound because the town of Fermignano, has always been connected to Urbino from its origins and only in 1818 the first town Council of Fermignano was established. In the same year the council of the castle of Fermignano and of the surroundings villas, met on the top floor of the tower and started a new phase for the small town.

The town developed around the Metauro river which almost surrounds it and that has set the pace of many important transformations of its social and economic life.

The walkscape goes through the major way, the seven alleys and the three squares that have created Fermignano, telling about the transformations that occurred during the passing of time and that are already visible nowadays. So the places of the walkscapes are even more outside the castle; the first stages of the walking are the last ones in order of appearance in the story of the town, but as we usually do in the walkscapes, we read the current structure to know and interpret the past.